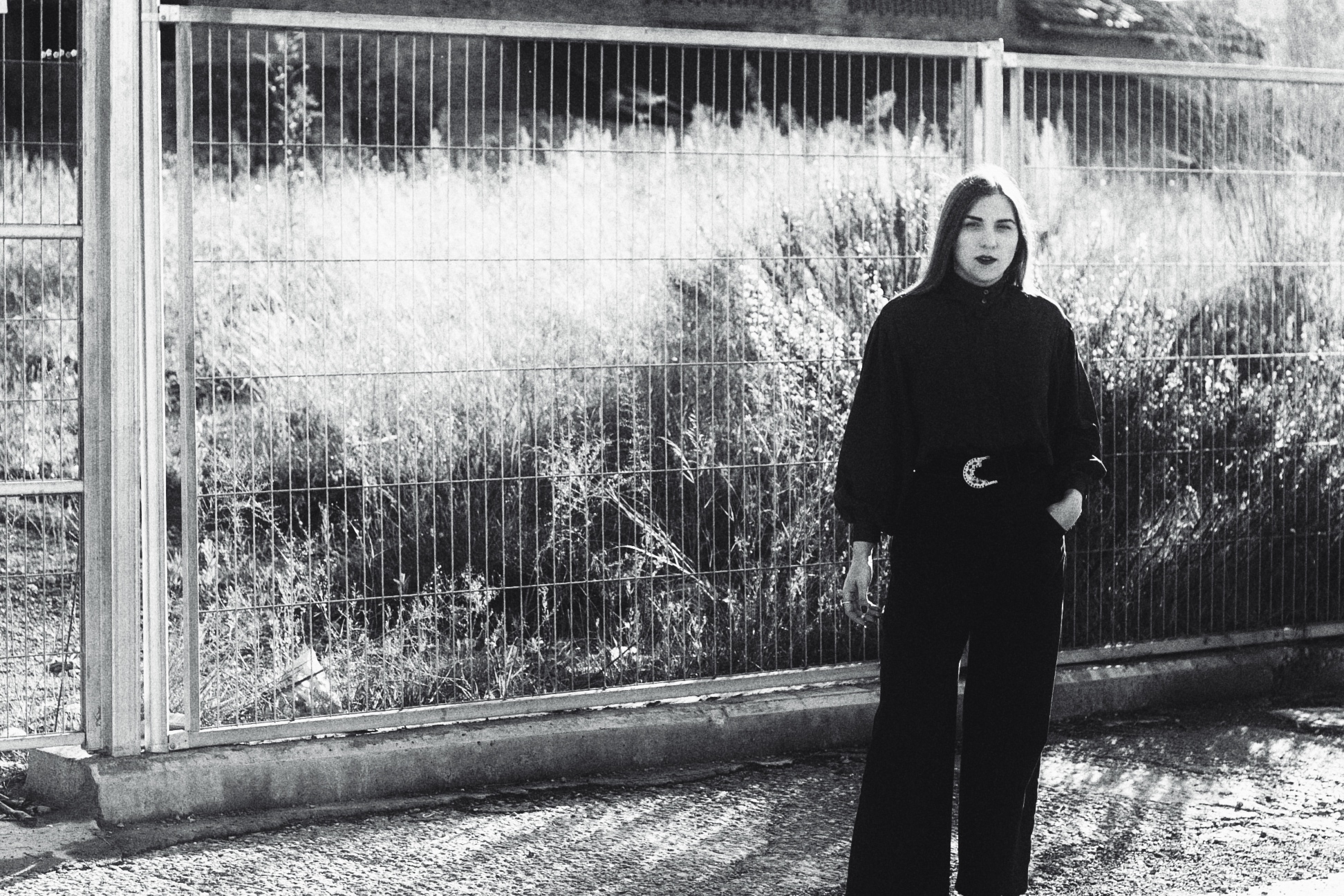 "Electronic bedroom music is a way to be descriptive without getting too much deep into genres and because all the productions were created, performed and recorded in home studios"

LIO press is a new imprint founded by Alicia Carrera, focused on limited handmade editions (music and visual, prints and publications).
Zauberstab V.A. Volume 1 is a compilation of electronic bedroom music made by contemporary artists that belong to similar sonic spheres.
The A side feels like a holiday in an exotic landscape; the kind of place you don't want to leave. The B side then goes in a slightly deeper meditative direction, but not too far, since the sparking disco-infused psych exploration of ’Space Surfari’ will hold you back from falling into the void of the unconscious.
What comes next is the sound that would welcome a moonlit night sky. The C side slinks into a minimal synth oriented exploration, ending with the intergalactic hopeful drift of ‘Har’.
The last side will provide a comfortable seat on this hypnotic journey. ‘Été 2017’ is an ode to the late summer nights, a mind-driving loop carried by gentle percussive sounds, filled with some bass deepness. The next tracks are the right balance between a hug and a breeze of fresh air for your mind and soul.

We asked to Alicia Carrera about this futuristic project :

The idea of the compilation is something that came along spontaneously a while ago (in 2018); most the tracks submitted were from artists and friends that sent me the music to play or just to listen. When I moved to Barcelona in 2014, I started a fanzine called Zauberstab, in order to bring out music discoveries into paper format, that back then I considered was hidden or found interesting for some reason, in spanish. I also liked the idea of involving people that would feel connected with those kinds of music styles, for instance some of the articles were written by local record shop owners or music enthusiasts, put together with the images of different artists and photographs. Initially it was thought as a paper collectable to read on the metro on the way home, the size was a piece of paper that could fit in the pocket. The zine had two editions, so for the third, the idea was to include some music. Basically the initial idea was to put out a Zauberstab tape and release contemporary music unknown.
But then me and Pierre (Lil Ronin) became friends, and after sharing music inputs, he got involved in the idea and put a lot of help in the project since the beginning. He also contributed with some of his music, which is great. Afterwards, with the help of Donato Dozzy on the mastering, the initial idea of the tape naturally developed on a 2x12” vinyl. Everything on the edition is made locally, the pressing is made in Spain, and the covers and inlays printed and handcrafted in Barcelona. I take care of the design, and personally the handmade process is very important.
All the artists involved are people who I crossed paths with at some point, shared experiences and became part of good moments. Most of the collaborations were submitted by close friends, but I also asked for music to artists that I admire and that I also know personally. It also includes one track of my co-project Megamal, now defunct, produced by myself and Benjamin Sánchez (Bejota Nova). The track Har by Poetas Sónicos was a present from Eva Geist and Donato Dozzy, a mantra made for a healing proposal. I would say that most of the tracks have some strong connection behind. 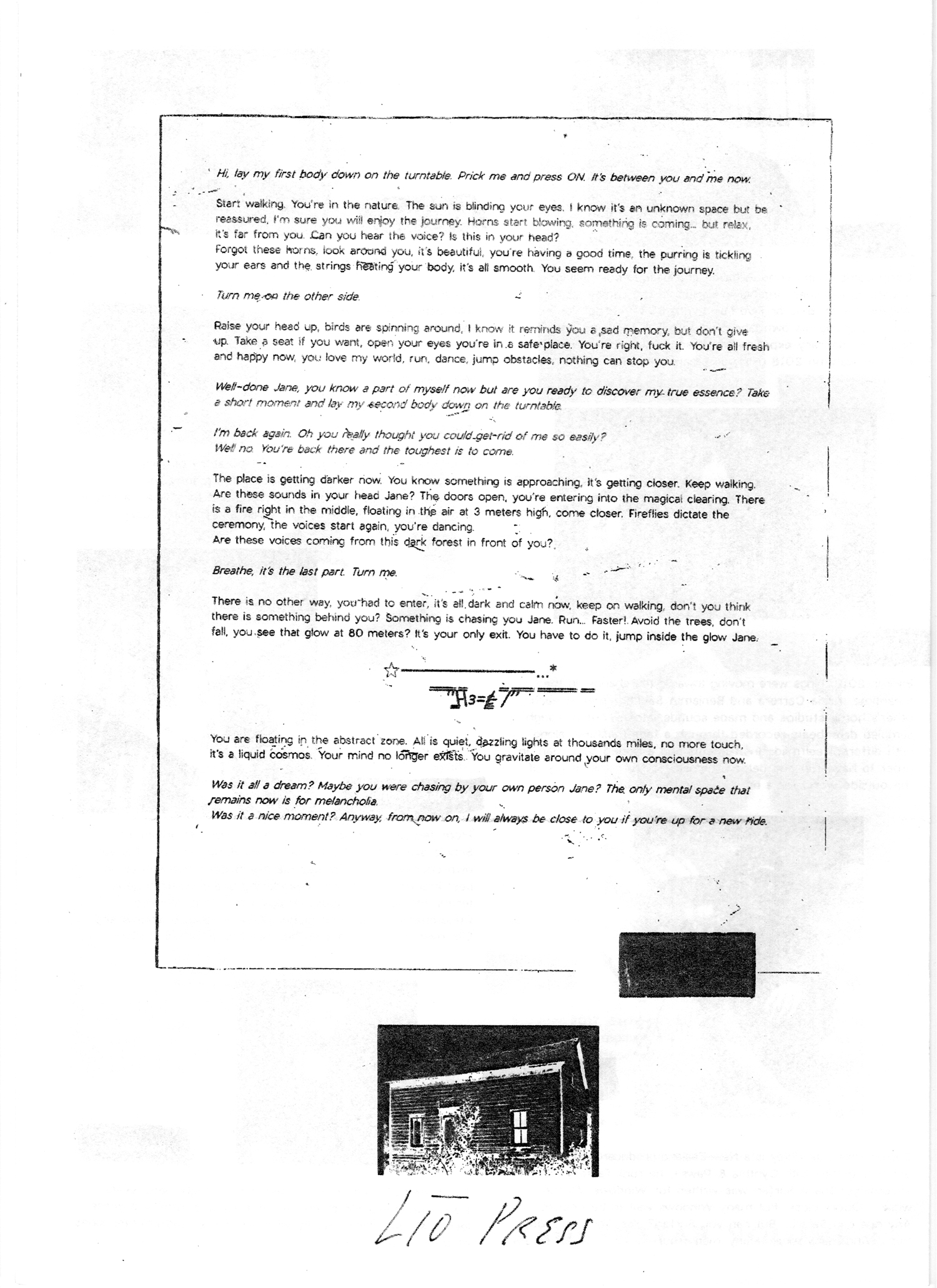 "The inlay text is from Pierre, he wrote it while he was in the countryside spending a weekend. It’s a sensory trip aiming to guide the auditor during the listening of the record. As far as we know Jane was an element of his experience, that flows on the imagination of the reader, and that the listener can feel a deep connection to it."