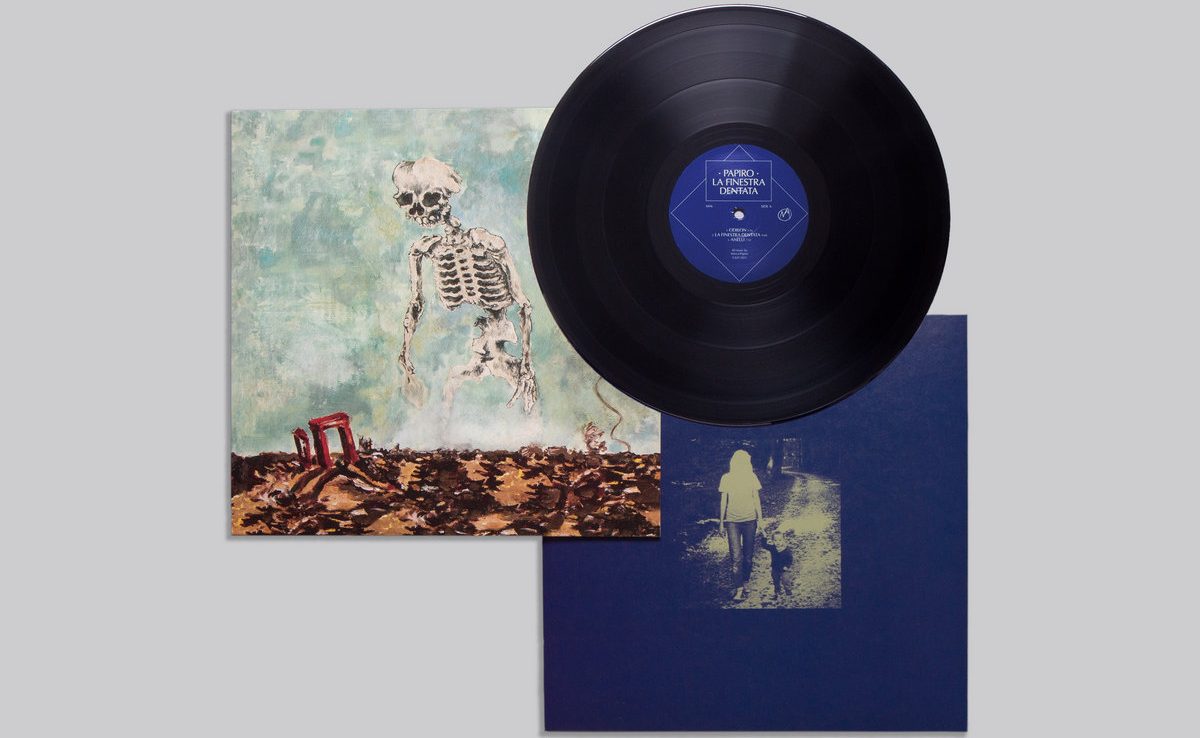 "I felt the different tracks like chapters in a fairy tale,
even though I didn't have a clear story in mind.
I like to work with blurred memory, or even with dreams, even lucid ones"

Papiro’s approach to music is never technical, but always personal. Since the mid-Nineties, he has released a handful of noteworthy albums, each carefully put together and seemingly self-contained, yet all sharing an unmistakable musical language and a certain escapist aura.
La finestra dentata (The Toothed Window), is no exception. It includes both studio and concert recordings from 2016–2020. The sounds on this album appear infinite and full of marvels, ingenious in portraying imaginary creatures and environments.
The title track and Anelli take up most of the first side and include live outtakes. Papiro likes to describe his performances as therapeutic. These swirly symphonies are specifically intended as immersive deep-listening experiences for concert venues, and have been edited for this album to meet the physical demands of vinyl and domestic use. Imagine the younger cousins of Laurie Spiegel’s Concerto Generator performance,
or Terry Riley’s Shri Camel.
However, those who know Papiro only from the stage might be unaware of a different side to his oeuvre; starry-eyed miniatures that may appear frivolous in comparison to the more heady stuff, but are nonetheless well worth discovering. Each piece adds a chapter to a phantasmagoric world populated by such characters as "Giant Duckling", "King Hard-Beard", or the "Bodulator". Tracks like the opener Odilon or Il triciclo nascosto, meanwhile, emanate a candor rarely found in the domain of serious music, and revisit Papiro’s early days of instrumental storytelling.

Marco Papiro is a Swiss-Italian musician, composer and graphic designer. He teaches at the Schule für Gestaltung in Basel and is known for the posters and album covers that he's created for a number of prolific artists (Sun Araw, Sonic Boom, Panda Bear, Oren Ambarchi).

Marco tells us more about this release :

For La Finestra dentata, the concept has evolved creating, as often happens to me. In this case I felt the different tracks like chapters in a fairy tale, even though I didn't have a clear story in mind. I like to work with blurred memory, or even with dreams, even lucid ones. For some tracks, my nine-year-old son helped me.
And maybe even Gianni Rodari.
Let's say that at the beginning I started with a collection of tracks, engraved in various situations. I just counted them, it was 36 tracks. Then as the concept crystallizes, i reduce the selection, some ideas no longer fit, but new recordings are needed instead.
Regarding the sounds, I try not to pull out too much, in the sense that I try to limit myself, perhaps choosing tracks with a similar aesthetic, or engraved with the same instruments, a certain elegance. This is not always easy, since on the one hand I have eclectic tastes, on the other I like to experiment. And then a synthesizer, even if it is limited, can create very different sounds. In these cases the concept behind can help with the final choice.
It is not easy to get rid of the influences, which are many and wonderful, but at last the recordings that touch me more remain.
I am not interested in current and fashionable trends in my music. I'm not saying that I don't like contemporary music, I just think there are people better suited than me to carry their time.
All the music that i love seems to resonate in a parallel universe