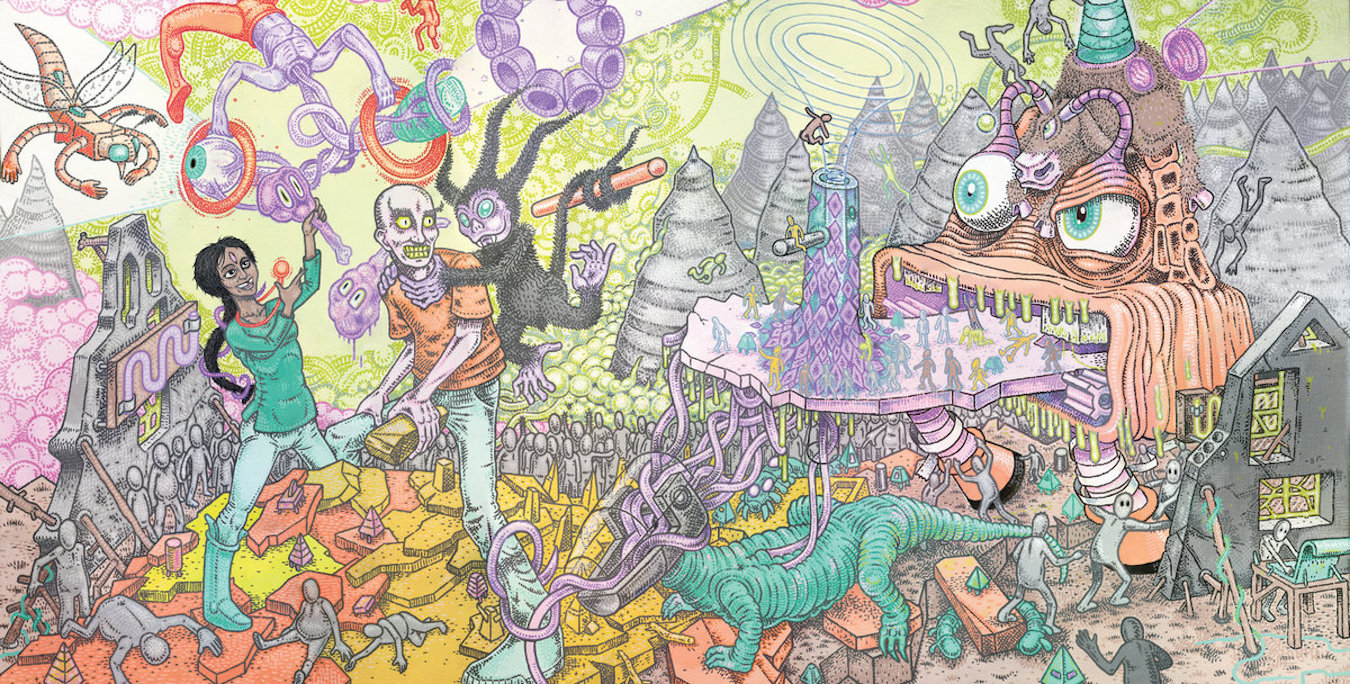 "I hoped that the music we made would be so powerful that it would break down all mental barriers and as a result be a fast track to ecstatic realisation! That would be the negation aspect. "

Ask pretty much any current name in underground/experimental dance music about their influences and you can guarantee that Shackleton’s Skull Disco project will be included. Probably one of the best labels to come out of dubstep and certainly one of the most influential for fans of some seriously out there music

“SKULL DISCO seems like a long time ago to me now and it is odd that it has reached a kind of cult status amongst some people.  I suppose that me and APPLEBLIM were around at the start of what later became dubstep.  We were big enthusiasts of that early sound, dubby 2 step or whatever.  The whole thing after seems quite alien to me in many respects.  I guess that I always wanted to do my own thing and so killing off Skull Disco seemed like a good way to force me into trying different approaches.  Since then I think the music has become more esoteric and psychedelic and not necessarily about just functioning in a club.  I have not really tried to do this consciously, it is just what I feel like making.”
(CHECK the 18 minutes RICARDO VILLALOBOS APOCALYPSO NOW MIX of "BLOOD IN MY HANDS")

After an excursion on HONEST JON'S label marked by an ecstatic and hallucinatory album with italian actor and singer Ernesto Tomasini,
Shackleton landed on COSMO RHYTHMATIC to continue these collaborative works with instrumentalists like jazz clarinetist Zimpel

“I thought that I should have a change from releasing myself as I was really busy with other aspects of my life so that I wanted someone else to take care of it.  I met the label boss and he didn't try to oblige me to do any social media or related promotional activities, so I thought that could be a good move for me.  I had heard the King Midas release a couple of months before and enjoyed it too."
Shackleton’s usual arsenal of resonating woods and metals, ceremonial polyrhythms and astral melodies acquire a more spontaneous character by the intervention of keyboardist Takumi Motokawa,mallet player Raphael Meinhart and singer Heather Leigh,whose symbiosis with the producer generates a truly beautiful and multi-directional flow of energy. For all their complexity and propulsion, these are indeed Tunes of Negation.

“With Tunes of Negation, I realised that I needed better musicians than myself to achieve the kind of spontaneity, fluidity and vibrancy I was looking for.  As a one-man performer I could do my Shackleton set in a club context as the focus is different but I wanted to expand the possibilities and present the music in a different context.
It is difficult finding the right musicians though as, on the one hand, lots of trained musicands lack the intuition and initiative that you need to really integrate into such a particular sound world, on the other hand, what I am expecting from the musicians is high technical ability.  To find musicians that have both technical ability and can integrate intuitively into the project is really difficult.  I have been really lucky with finding Takumi and Raphael and they have the feel for it and the ability."
"Last record has been quite difficult in some respects as we have had lockdown for vast parts of the year and Raphael was also stuck in his home town in Austria for most of it so I ended up having a lot more of my own influence on it than I had originally planned.
The record has as result ended up being quite a personal one.  I had a very sad year for various reasons and this is reflected in the record.  I think this is why it is not as accessible as the first one and has more atonal or dissonant sections.  I realise that this can be demanding for the listener but I think it will be a slow burner.  I hope so at least."
"I chose the name Tunes of Negation after reading a poem by Rumi called the negative way. I hoped that the music we made would be so powerful that it would break down all mental barriers and as a result be a fast track to ecstatic realisation! That would be the negation aspect. So it is actually positive in effect, rather than negative. The poem made me laugh as well. I have attached the poem so you will see it is not intended to mean negation in the sense of depressive or pessimistic or even destructive."

"Back in the day I did a punk/noise whatever fanzine, Zeke did some artwork for it.  He was always very talented.He has developed his own universe with his art so I am pleased it has also become synonymous with my releases.  They work well together.  I often give him a basic concept but after that I let him run with it.  The early Skull Disco sleeves are variations of that theme, ie. skeletons having a party.  After that I had a couple of dreams about Satan in a noose and that became one of the later Skull Disco sleeves.   The first Tunes of Negation sleeve was influenced by a couple of books I had read before, The Time Machine by HG Wells and The Possibility of an Island by Michael Houellebecq.I thought of a synthesis of these ideas and then Zeke ran with it and took it to a place I could not have thought about.  The new Tunes of Negation was a piece completely from Zeke's creation which spoke to me very strongly due to sad events in our life.  It suits the music very well." 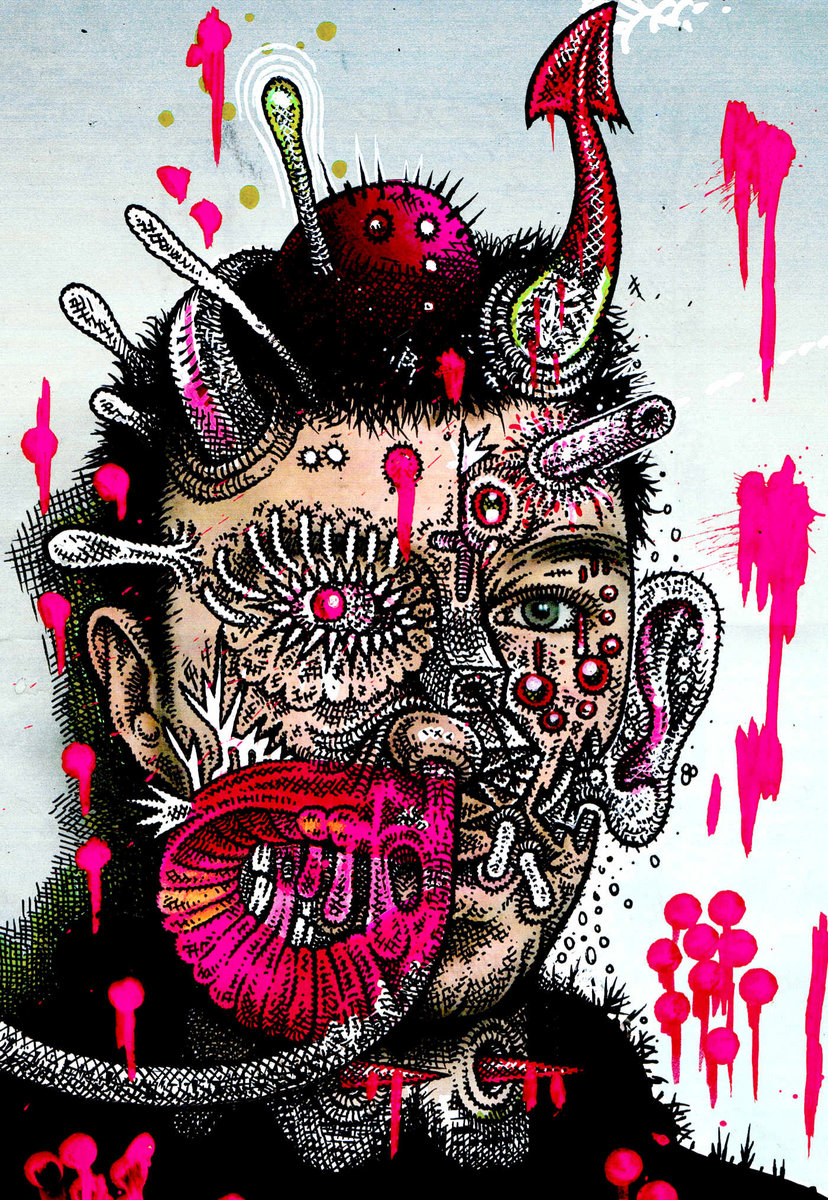